Of the two brothers one stood out. He was the louder and more enthusiastic one. As opposed to his counterpart who watched from the background, carefully planning each action. The grander brother rushed through ther plan and couldn’t sit still while the universe was defined. Facinated with every machination of their nature he did an uncountable number of expiriments that have altered the world they were building, so manny that even they could not predict their reprecusions.

But then, where is the fun in knowing everything? Grander just wanted to see his art work it’s way out of the chaos he made, to see everything fall into line by essetential and simple rules. Each action taken carelessly by the brother was intended to sow the chaotic energy of the early universe, making a mess bg enough it would clean itself. The end result of granders chaos formed only by his brothers temperate hand. 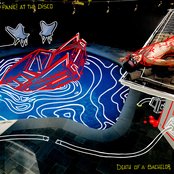 Victorious
Panic! at the Disco
13 hours

Go to the Light (Destiny Version)
Murder By Death
15 hours